Pacemakers are battery-powered implantable devices that function to electrically stimulate the heart to contract and pump blood throughout the body at the proper rate.

A pacemaker is a treatment for an abnormally slow heart beat that if left untreated, can lead to weakness, confusion, dizziness, fainting, shortness of breath and even death.

Slow heart beats can result from metabolic abnormalities, side effect of certain medication or failures in heart’s electrical system. These conditions can often be treated and a normal heart beat will resume. Sometimes, however, the electrical system that maintains the heart is irreversibly damaged 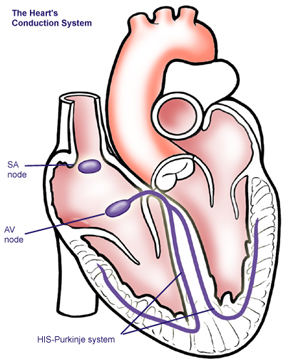 In a normal heart, the left and right sides of the heart beat together to maintain a steady supply of blood and oxygen to the rest of the body.

A typical heart beat begins with the sinoatrial node, a cluster of specialized cells located in your right atrium, firing an electrical impulse that spreads through the walls of the right and left chambers, causing them to contract, thus forcing blood into the lower chambers.

The impulse then travels to the atrioventricular node, another center of special cells located in the lower part of the right atrium. After a short pause, the pulses travels into the lower chambers, causing them to contract, forcing blood out of the heart to the lungs and body.

In a weakened heart, blood moves through the heart and body at a slower rate than normal and pressure in the heart increases, which overtime causes problems. Specifically, it results in a delay between the contraction of the two sides. When this happens, the walls of the left ventricle are unable to contract at the same time as the right ventricle, leading to an increase in heart failure symptoms, such as shortness of breath, dry cough, swelling in the ankles or legs, weight gain, fatigue, or rapid or irregular heart beat.

How does a pacemaker work?

Traditional pacemakers are used to treat slow heart rhythms. Such pacemakers use one or two fine wires to sense and pace the right lower chamber, and often the right upper chamber.

Who is a candidate for a pacemaker?

Pacemakers are used to treat a heart condition known as bradycardia, which is an abnormally slow or unsteady heart rhythm (usually less than 60 beats per minute).

Symptoms of Bradycardia include:

Having a pacemaker implanted sounds scary, but it is considered only a minor surgical procedure today. It is not open heart surgery. After a pacemaker is implanted, most people resume their previous lifestyle with little or no limitations.

What can I expect as a Pacemaker recipient?

Do not eat or drink anything after midnight the night before the procedure. If you must take medications, drink only small sips of water to help you swallow your pills.

When you get to the hospital you will change into a hospital gown for the procedure, which will be performed in the Electrophysiology Lab. You will lie on a bed and the nurse will start an intravenous line to deliver medications and fluids.

You will receive a medication through your IV to make you very drowsy. The medication will NOT put you completely to sleep so if you are uncomfortable or need anything during the procedure you will be able to communicate that to the nurse. However, due to the medications you may not recall the procedure afterwards.

This is completely normal.

Prior to the procedure, the nurse will connect you to several monitors that will allow the medical staff to monitor your condition at all times during the procedure.

The staff will clean and shave the area of the incision, after which the doctor will numb your skin by injecting a local anesthetic in the shoulder area. You will feel a slight pinching or burning feeling at first and then the area will become numb.

After you are numb, a two-inch incision is made parallel to and just below a collar bone to insert the pacemaker and leads. You may feel a pulling as the doctor makes a pocket in the tissue under your skin for the pacemaker. You should not feel pain. If you do, you will be able to tell the staff.

During the procedure, two very fine wires will be placed into a vein and the doctor will use a fluoroscopy machine (a special x-ray machine that allows the doctor to see your blood vessels), to guide them into the upper and lower right chambers of your heart. The lead tips are attached to your heart muscle. The other ends of the leads are attached to the pulse generator, which is placed under the skin in the upper chest, just below your shoulder.

After the leads are in place, the physician tests the leads to make sure lead placement is correct, the leads are sensing and pacing appropriately and the right and left ventricle are synchronized. This is called “pacing” and involves delivering small amounts of energy through the leads into the heart muscle. This causes the heart to contract. When your heart rate increases, you may feel your heart is racing or beating faster. It is very important to tell your doctor or nurse any symptoms you feel. Any pain should be reported immediately.

After the leads are tested, the doctor will connect them to your pacemaker. The actual pacemaker device is about half an inch deep and one and a half inches wide. The rate of your pacemaker and other settings will be determined by your doctor. The final pacemaker settings are done after the implant using a special device called a “programmer.”

After the pacemaker implant?

After the pacemaker implant, you will be admitted to the hospital overnight where your heart will be monitored for rate and rhythm. The following morning, you will sometimes have an x-ray to check your lungs and the position of your pacemaker.

Before being released from the hospital, your biventricular pacemaker will be tested one last time. The nurse or technician will place tiny electrodes onto your chest that attach to a computer monitor by a cable. A small machine known as a programmer is used to check your pacemaker. It has a wand that is placed directly over the device. This programmer allows the nurse or technician to read your pacemaker settings and make changes during testing.

With these changes, the function of the pacemaker and leads can be evaluated. You may feel your heart beating faster or slower.

This is normal; however, report all symptoms to the nurse. Results of the pacemaker check are discussed with your doctor who will then determine your pacemaker settings.

Usually, you will be able to go home the day after your pacemaker was implanted. Your doctor will discuss the results of the procedure and answer any questions you may have.

Keep the area where the pacemaker was inserted clean and dry. After five days, you may take a shower. Look at your wound daily to make sure it is healing. It is possible to feel the pacer generator under the skin and a slight deformity of the skin can be visually noticed. Call your doctor if you notice unusual redness, swelling, drainage from your wound, or if you experience fever or chills.

You will be restricted in movement for the month following the procedure. You should not lift your arms above your shoulder. You should not life heavy objects. Activities such as golf, tennis and swimming should be avoided for six weeks after the pacemaker was implanted.

Despite what you may have heard, microwave ovens, electric blankets and heating pads may be used. Cellular phones can be used on the side opposite your pacemaker.

Directly after the procedure, you will receiver a temporary pacemaker ID card that tells you what type of pacemaker and leads you have, the date of implant and the doctor who implanted it. In about three months, you will receive a permanent card from the company. It is important that you CARRY THIS CARD AT ALL TIMES in case you need medical attention at another hospital.

If you will be traveling through an airport, present this card to the security personnel and they will scan you will a security wand, rather than require you to step through the walk-through detectors. (your device will set off the alarm).

Ask your doctor or nurse for more specific information regarding what types of equipment may interfere with your pacemaker.

About six weeks after the procedure, you should see your doctor for a complete pacemaker check. This check is very important as adjustments will be made that can prolong the life of the pacemaker. You should also visit your doctor every six months following implantation to ensure everything is operating properly.

How long will my pacemaker last?

Pacemakers usually last anywhere from three to 10 years, so it is important that you maintain a regular schedule of visits with your physician so that he or she can monitor its status.

How long your device will last depends on how hard the battery inside the pacemaker has to work. This is affected by how much energy is required to pace the heart and how the system is programmed. Thanks to ongoing research and development, the life of pacemakers continues to increase as their size decreases, making them more comfortable for people.